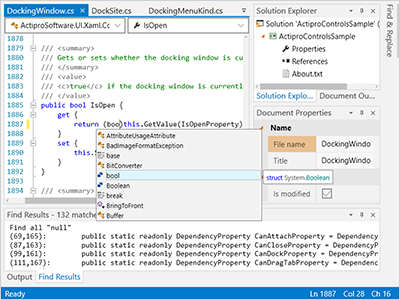 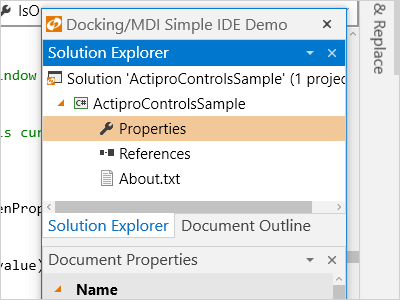 Windows can be docked, attached (to create a tab group), floated, auto-hidden, or moved to an optional MDI area. Complex resizable hierarchies of tool and document windows can be created. 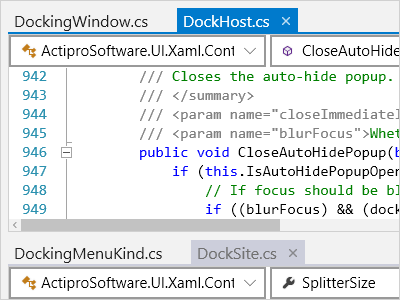 In tabbed MDI each tab represents a document that can be reordered or moved between tab groups. Tabbed MDI documents can be floated into their own full-featured floating dock host. 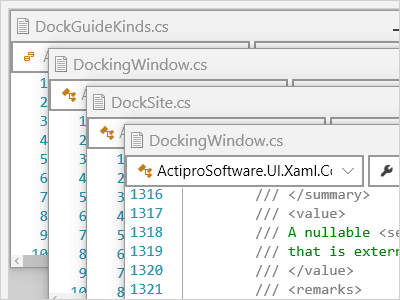 In Standard MDI each document is represented by a Window-like control that can be moved, resized, minimized, or maximized. Cascade and tile operations are built-in. 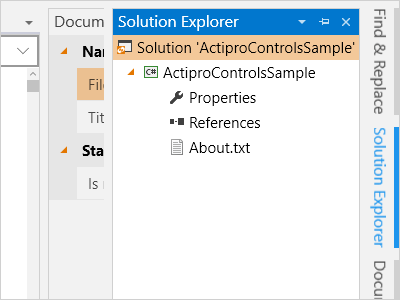 A tab group of tool windows that is docked can be unpinned to enter an auto-hide state. When in this state, tabs for each tool window appear on the outer edges of the layout. 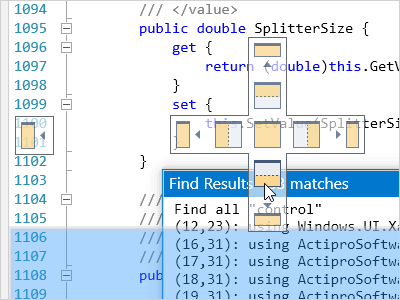 When dragging windows around, dock guides are displayed with the valid drop locations, and a drop target shows the resulting bounds. There is full control over which drop locations are allowed.

Switchers appear when pressing keys like Ctrl+Tab and allow you to quickly navigate to an open docking window via the keyboard. They can also display descriptions about each docking window.

Quick subtle animations are used throughout the product. Tab dragging uses smooth animation, dock guides and drop targets pop into place, and auto-hide popups slide in and out.

The docking layout and its windows can be set up in XAML or programmatically-created. In addition, the end user's layout customizations can be saved and later restored between app sessions.

Docking windows can be specified explicitly, or automatically generated by binding to a list of custom view models.

Several controls are included that can be reused stand-alone in your apps, such as one that behaves like a resizable window, and an advanced tab control that has tons of features not found in standard tab controls.

Drag and drop tabs to quickly reorder them within their container. Drag them to any other location within the dock site to dock them, or keep them floating above it.

While most applications have tool windows that surround a workspace with a MDI area, any kind of custom content can be inserted into the workspace in place of a MDI area.

When there is no workspace within a dock site, the tool window hierarchy fills the entire docking layout. This mode is useful for apps that want their UI to be made completely of tool windows.

One or more dock sites can be linked with other dock sites in your app, including ones in separate top-level windows. When dock sites are linked, docking windows can be interactively dragged between them.

This add-on product includes these UI controls, for use in applications built with the Universal Windows platform:

The best way to learn about our UI controls and their features is to download a free trial. This will allow you to see samples, documentation, and integrate them into your own apps.

Do you have any licensing or sales questions? Do you have a technical question while evaluating? Please contact us so that our friendly staff can assist you.

When your app's development team is licensed, you can distribute an app using our royalty-free UI controls to anyone. Our purchase page helps you calculate the licensing to meet your needs.