Yesterday we announced that a new Metro Light theme is coming to our WinForms Controls in the 2014.1 version.  This new theme was modeled after Visual Studio 2013's appearance and helps give your app a sleeker look.

In the newer Visual Studio versions, auto-hidden tool windows are represented by a UI element that no longer looks like a tab.  Instead, the "tab" contains the tool window's name with a thick line underneath.

In this screenshot, you can see the mouse hovering over the Events auto-hide tab: 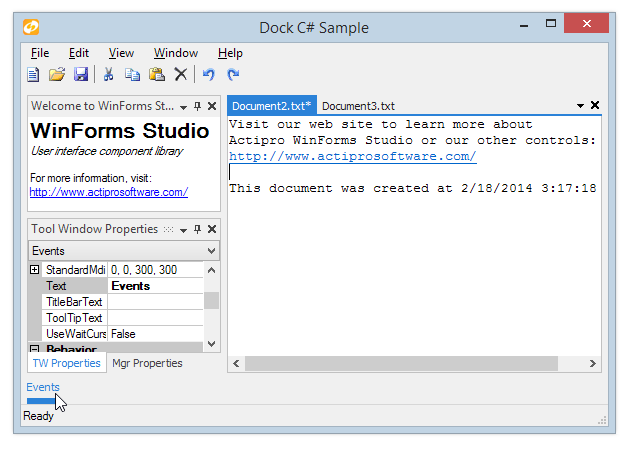 Another change in Visual Studio is that hovering over the tab no longer automatically shows the tool window in a flyout.  Users must now click to display the flyout.

Our DockManager already has a AutoHideShowOnMouseHover property that can be set to false to achieve that sort of behavior.  For the 2014.1 version, we have enhanced it further.  If the property is false, and a tool window's auto-hide tab is clicked while the related tool window flyout is displayed, the flyout will now toggle closed.  This achieves similar functionality to how Visual Studio 2013 works.

These additions to give your WinForms app a fresh new Metro look will be available in the 2014.1 version of our WinForms Controls.