In the last post, we gave an overview of the new edit box controls that were just released in our WinRT/XAML Editors product, including a list of some options that are available in all edit boxes.  In today's post, we're going to take a look at a universal edit box control that is used to select a color value.

The ColorEditBox control is used to input a Color value, and uses a ColorPicker control in its popup.

Edit boxes work great with a keyboard.  When the edit box is focused, values can be directly typed in.  Type in "Red", "#f00", or "#ff0000" and press Enter.  Any of those will commit a red color value.  You can also move the caret to one of the ARGB components and use keyboard arrow keys, PgUp/PgDn, or the mouse wheel to increment values.

If the user doesn't have a keyboard, mouse or touch can be used to display the popup.  Just drag the sliders to select a different color.  Or edit the ARGB component values directly to set exact values.

All of our WinRT/XAML controls are universal and support both Windows Store and Windows Phone apps.  In the case of edit boxes, they often have a different UI that has been tailored specifically for Windows Phone.

Above we see how a ColorEditBox renders on a phone.  Since phones don't have hardware keyboards, the control has been crafted to look like a native ComboBox, although we also support an optional clear button.  Then rest of the control behaves like a button.  When the button is tapped, this full screen dialog is displayed: 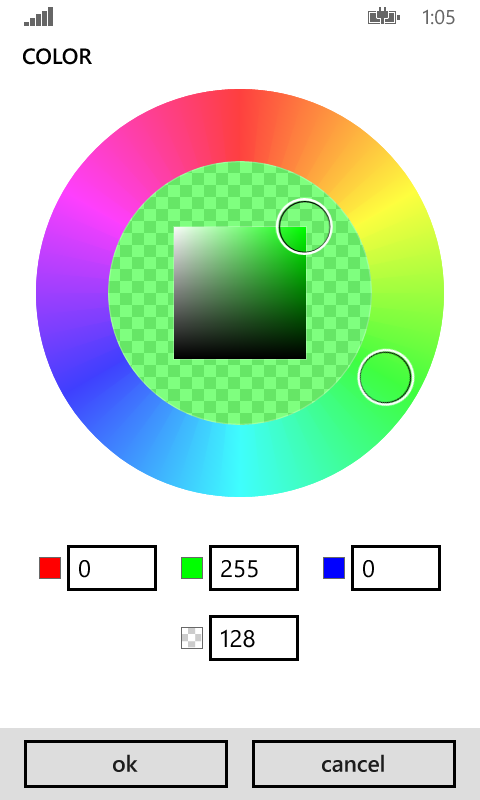 Everything on the picker popup displayed here is big and touch friendly… a perfect design for color selection on Windows Phone.

This post shows how a ColorEditBox control can make it simple for an end user to select a color within a Windows Store or Windows Phone app.  Download our WinRT/XAML Controls to check it out, along with our other beautiful and functional editor controls!