In our previous post, we discussed all the great new feature additions coming to our WindowChrome implementation.  Another related item for the upcoming maintenance release is that we've completely reimplemented how RibbonWindow works and now have it using WindowChrome to manage all its custom chrome API calls.

This means that the same implementation of custom chromes will be used for both RibbonWindow and regular windows that use WindowChrome.  You'll get outer glow effects in Metro themes, full Aero snap/dock support, etc.  Everything described in our previous post. 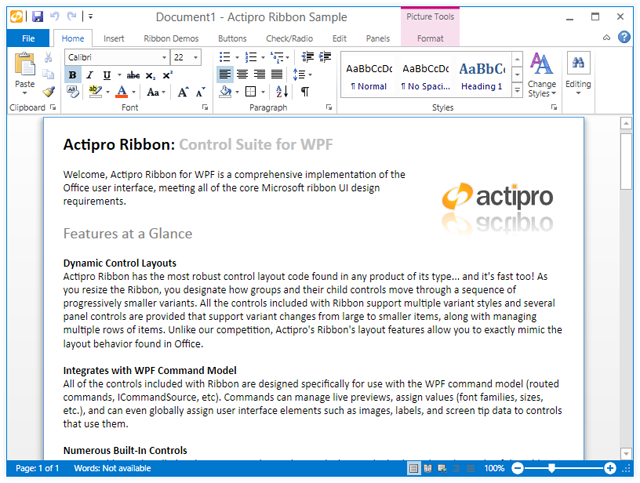 If you are an Actipro customer, once you get the new features you'll be able to toggle the theme to Metro Light and instantly make your ribbon windows and other controls look like the above.  That's really slick!

These great new features will be part of the next WPF controls 2012.2 maintenance release build 571, due soon.  But that's not all… we have some more major announcements that we'll make for this version soon.

Hi Daniil, we will likely add one in a future version.
Posted 10 years ago by Daniil Monin - Software Architect, Sovacode Software