We've had several requests for a dark theme, and we've delivered one for the upcoming 2013.1 version of our WPF Controls! 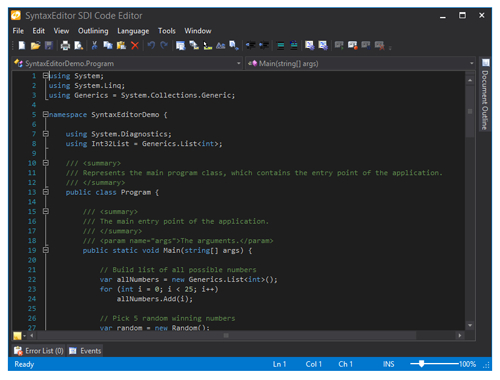 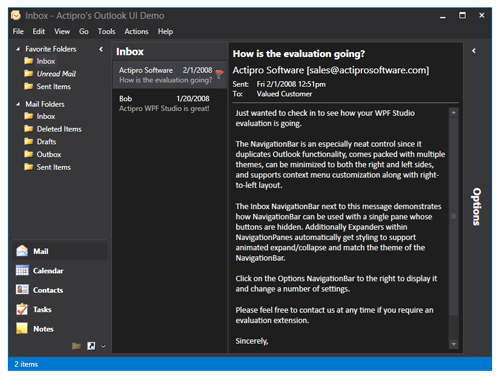 In this screen, we show a mail app using the dark theme.  Just like in the prior screen, it is a regular WPF Window but we've applied our WindowChrome on it to enable the full Metro appearance. 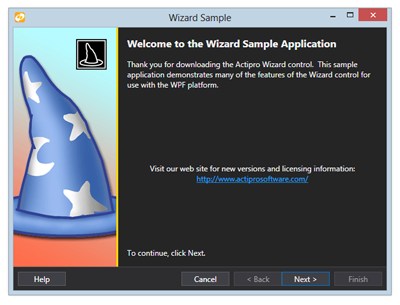 All of the Actipro and native controls support the new theme.  Here we see a Wizard with various text, links, and buttons all fully themed.

Actipro has a very robust theming system that allows you to fully theme your entire WPF application with several lines of code.  We include over 10 built-in themes and they can optionally apply themed styles to native WPF controls as well.  Each theme involves almost 900 distinct resource assets, such as brushes and thicknesses, specifically designed for the theme.

In addition, our WindowChrome class lets you instantly transform a normal WPF Window to a chromed window that matches the theme.

The end result is that your windows, native WPF controls, and Actipro controls all blend well together and provide a consistent user interface for your customers.

This new Metro Dark theme will be included in the 2013.1 version, due in the next several weeks.

Posted 10 years ago by Cory

I like it a lot, BUT I NEED IT NOW! Lol. Is there no way to make use of this now?
Posted 10 years ago by Bill Henning (Actipro) - Actipro Software LLC

Hi Cory, We're excited to get the new theme out too. We're very close to having v2013.1 done (it's the only version with the new theme). It will be soon! Watch our blog for the release notification.