SyntaxEditor Is Coming to Windows 8.1

First Look at a Demo

Let's see a screen of the WinRT version of our SDI Code Editor demo: 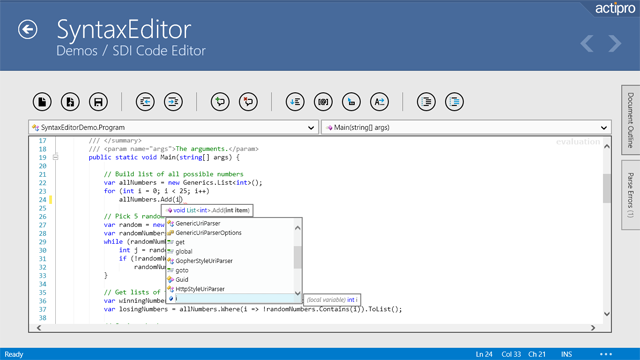 Here we have a SyntaxEditor contro showing off the advanced C# language that is part of the .NET Languages Add-on.  With SyntaxEditor you can easily add text and code editing functionality to your Windows 8.1 apps.  It supports custom language creation, and as seen above, has some pre-built languages available with features like automated IntelliPrompt popups.

We're really excited to get this finished up and into your hands.  If you are interested in helping us beta test SyntaxEditor for WinRT XAML, please contact our sales team (if you haven't already).  We expect the beta to be ready in the next week or two.