Last month we posted that we were beginning development of a new TreeView replacement control that addressed the many shortcomings of the native WPF TreeView, and were asking for input at that time.  We've been working on this control for both WPF and UWP and have made very good progress.

Thus far these features have been completed:

Here's a screenshot of a recent sample being put together for the control: 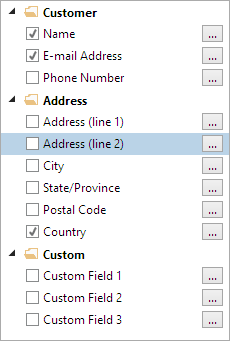 In this sample, we have two levels of nodes.  The top-most level is folders (whose icons actually toggle with the expand/collapse state), while the inner level has checkboxes and buttons that allow for a dialog to be displayed when clicked for further configuration.

The control is coming along really nicely and our goal is to match general features found in the VS Solution Explorer.  The features above are implemented for both WPF and UWP.  We still have more features planned before we open up a beta.

If you have any other suggestions, please either write our support address with your feedback or join our Slack discussion on the topic and chat right with us.  The benefit of the chat option is that we are posting screenshots and asking for feature input right during development.  It gives you an opportunity to give direct feedback and help guide features.

Posted 7 years ago by Erel Uziel

Will be great to have drag & drop support.