Earlier this week, we published a WPF Controls 2018.1 build 671 maintenance release that added some major new features for our WPF Shell controls.  It also made some minor updates and bug fixes in other WPF controls, so it is a highly recommended update.

Actipro's WPF Shell controls allow for easy folder and file browsing. While the product comes packed with a pre-built implementation for the Windows shell that mimics Windows Explorer, the controls are fully customizable, allowing you to filter or change the folders/files presented. Or build your own shell service to support other files systems, such the remote side for a FTP client.

The initial 2018.1 release of the Shell controls first introduced the ShellTreeListBox control (presents a shell folder hierarchy in a tree structure) and the ShellListView control (shows the contents of a selected folder).  This first build only supported the Details layout mode in ShellListView, which is the one most commonly-used, and has multiple columns of shell object information display.

This latest maintenance release also can display thumbnails that represent shell object content in place of the standard file type icons in several of the new layout modes.

Let's take a look at a folder that has the thumbnails feature off: 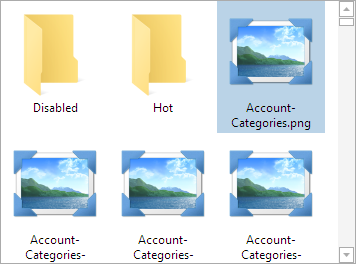 You can see that the folders don't show any content and the images display a standard icon.  Now let's compare the same folder with the new thumbnails feature on: 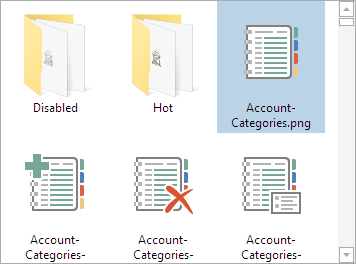 That's quite an improvement and really helps users get a feel for the content.  The thumbnails displayed are provided by the system, so the thumbnails should support generation from any shell extension that supports thumbnails.

The features described above are available today.  Please download our latest WPF controls build to get them.

The next feature we're working on for ShellListView is adding a virtualizing panel for these new layout modes that will allow folders with many shell objects to display quicker.  If you'd like to help us beta test new features like the virtualizing panel, please write our support address.  And "Chat With Us" about our shell controls on Slack.