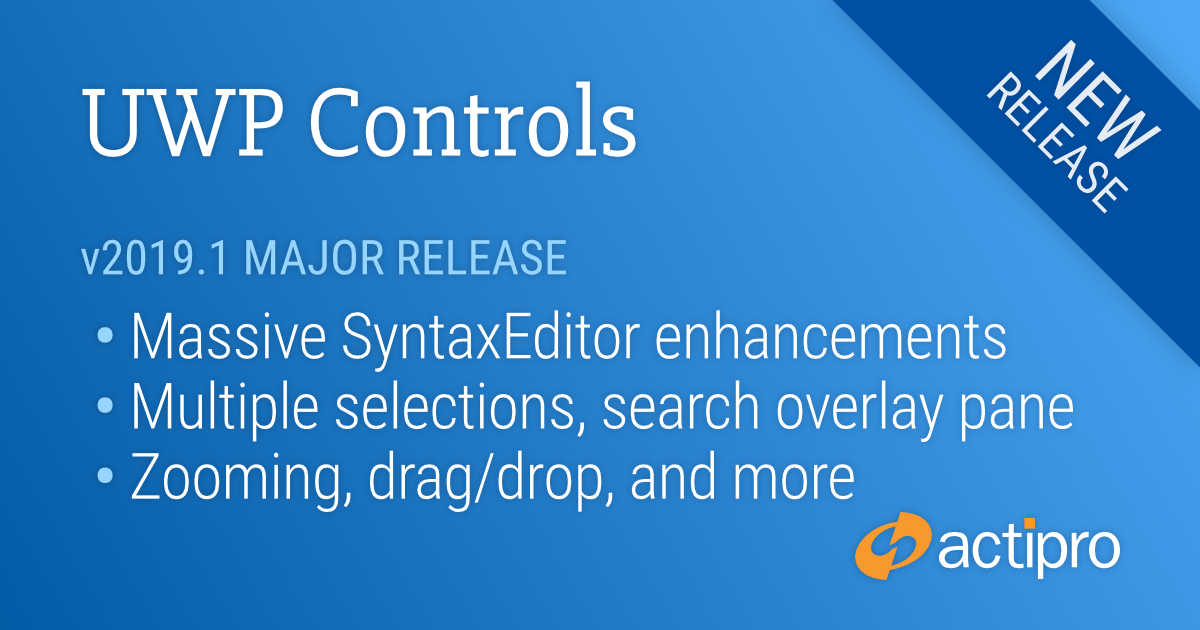 We are pleased to announce the release of the 2019.1 version of our UWP Controls.  This version includes the massive SyntaxEditor enhancements and updates we’ve been working on that have previously been described as “SyntaxEditor vNext” in the blog.

This announcement post contains the detailed list of updates in the 2019.1 version.  Please be aware that Windows 10 Fall Creators Update (version 1709) or later and usage of the Microsoft's free 'Win2D.uwp' NuGet package are now required.

We also have published a maintenance release for the 2018.1 version.  All of the updates are listed in this announcement post, and are included in the 2019.1 version codebase as well.

The internals of SyntaxEditor have been heavily refactored to support a cross-platform API across the WPF, UWP, and WinForms platforms. This allows SyntaxEditor features for the three platforms to be kept in sync moving forward.  The 2019.1 WPF version of SyntaxEditor is already out and the WinForms version will follow later this year.

Text rendering is many times faster than in the previous versions, making an enormous leap forward in performance.

Text drag and drop support has been added, allowing text to be quickly moved around the editor.

The vertical scrollbar accelerates its scrolling speed the longer you hold the up or down button.

A new optional ruler margin has been added.

The TextStylePreview control has been added that renders a highlighting style.

Full XML schema support, including validation and automated IntelliPrompt, has been added to the XML syntax language.