In today's post, we'll show the optional Find All button that was recently added to the SyntaxEditor (WPF, Silverlight, and WinRT/XAML platforms) EditorSearchView control.

SyntaxEditor has always had the ability to perform "find all" searches programmatically, however we received feedback from numerous customers looking to add this to our EditorSearchView control so that their end users could also access it. 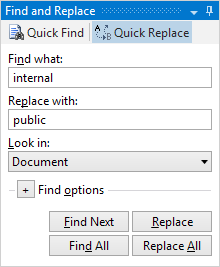 The EditorSearchView control seen above shows the new Find All button visible.  Note that it is not visible by default (the new EditorSearchView.IsFindAllButtonVisible property defaults to false) since unlike the other find and replace operations, there is no automatic UI change in the editor itself for a find all operation.  Instead, you need to display the results somehow, such as in a find results list.

This screenshot shows an example find results list.  The full source code for this sort of setup is included in the samples that come with SyntaxEditor.

Providing the ability for your app's end users to find all instances of search text is certainly a handy addition.

In today's post I'd like to show a new feature that was recently added to SyntaxEditor (WPF, Silverlight, and WinRT/XAML platforms): move selected lines up or down.

Moving a range of selected lines from one place to another is a very common task in any text editor.  Of course this can be accomplished by cutting and pasting the selection around.  But for small adjustments to the location of several lines, the ability to simply move the lines is a valued feature.

We've added the ability to move selected lines up and down via the Alt+Up and Alt+Down keys respectively.  Let's see a couple examples of it in action.

In this sample, I selected the lines that contain the AnotherMethod method.  Then I pressed Alt+Up several times to move the method above the Bar method.  I then pressed Alt+Down to move the lines back down to their original position.

In this second sample, I had a comment that wasn't in the right place and I wanted to move it up.  I just put the caret on the line and pressed Alt+Up a couple times to move it back to the right spot above the color property declaration.

The ability to move selected lines up and down is a real productivity enhancer when doing text editing. 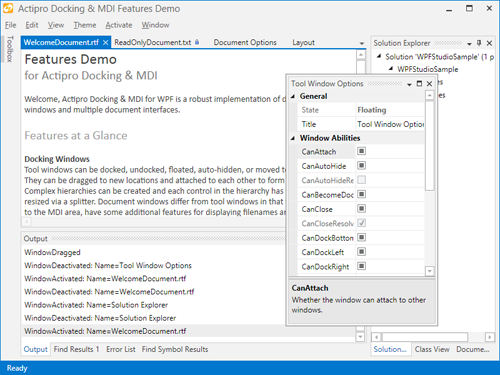 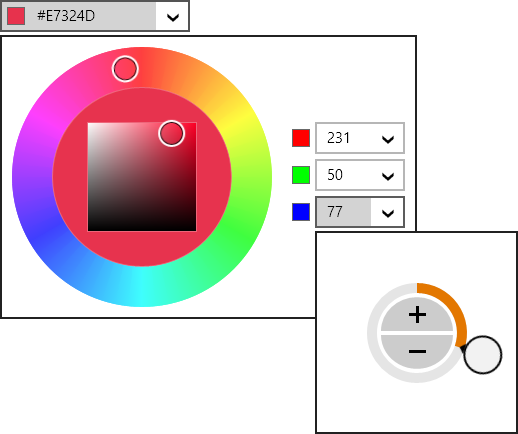 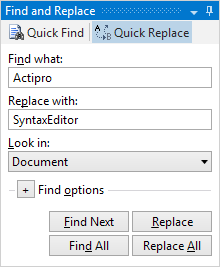 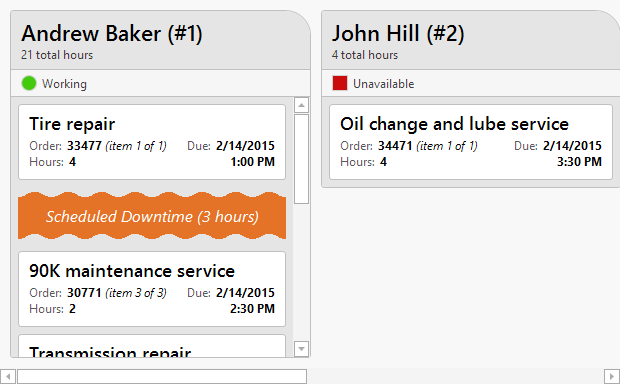 We've had a lot of customers throughout the years ask us for a sample that could show how to harness our SyntaxEditor .NET Languages Add-on and its automated IntelliPrompt within an ASP-style server tag context.  This is especially useful for any sort of template generating scenario.

We had an internal sample that we would send customers upon request, but several months back, we cleaned it up, enhanced it, and added it as a new QuickStart sample.  In this post, let's have a look at the QuickStart sample that was added to the SyntaxEditor for (WPF, Silverlight, and WinRT/XAML platforms) in the 2014.2 version showing how to achieve automated IntelliPrompt within ASP-style server tags.

In the animated presentation below, you can see how there is a basic parent language whose lexer only knows to tokenize and color the word "date" as a keyword.  In real-world usage, the lexer could be made to fully colorize the text like normal.  The lexer has hooks that cause a transition to the C# language found in our .NET Languages Add-on when ASP-style delimiters are encountered.

Both <% %> and <%= %> style tags are shown in this example.  What happens behind the scenes is that the parent language's parser will code generate C# code.  It will make a C# class named "__Generated" and a method named "__WriteOutput".  All the text of the parent language is output within "Response.Write" method calls.  C# code in the server tags is injected directly.  The resulting full C# code is placed in a separate in-memory document and parsed.  Finally the resulting parse data is returned, along with mapping data to know how offsets between the server tag range in the source document and those in the parsed C# document align.

Then there are several customized C# IntelliPrompt providers that know how to use that mapping data and translate offsets so that automated IntelliPrompt is fully functional within the server tag regions of the main source document, yet based on the generated C# code.

Tricky stuff, but it works great!

The full source sample described above was added in the first v2014.2 release of our WPF, Silverlight, and WinRT/XAML controls and is available for you to check out.

SyntaxEditor documents have always had the ability to be fully read-only and developers can also can cancel specific text change events for more fine-grained control. That being said, there are many cases where developers want to have an easy way to tell SyntaxEditor that a certain of text should not be editable by the end user.  That's where read-only regions come into play.

Best of all, the ReadOnlyRegionTag class also implements IClassificationTag, which associates the tag with a classification type for read-only text and gets styled with a silver background.  Of course this is fully customizable if you wish to have a different appearance, or no appearance difference at all.

When the end user attempts to edit anything that would cross within a read-only range, the text change will realize that it intersects a read-only range and will cancel.  The text range protected by the read-only region remains unchanged.

This is a very handy feature for certain scenarios and was highly requested by our customers.

The read-only region features described above were added in the latest v2014.2 maintenance releases of our WPF, Silverlight, and WinRT/XAML controls and are available for use.