We're happy to announce that the 2018.1 versions of our WPF, Universal Windows, and Silverlight controls have been released.  These versions include a new WPF Shell product, new features, and a lot of minor updates and bug fixes throughout the control sets.

See all the details on the 2018.1 releases in the various announcement posts:

The 2018.1 version of the WPF Controls introduces a beta of a new Shell controls product that we've been developing the past several months.

Actipro Shell controls allow for easy folder and file browsing. While the product comes packed with a pre-built implementation for the Windows shell that mimics Windows Explorer, the controls are fully customizable, allowing you to filter or change the folders/files presented. Or build your own shell service to support other files systems, such the remote side for a FTP client. 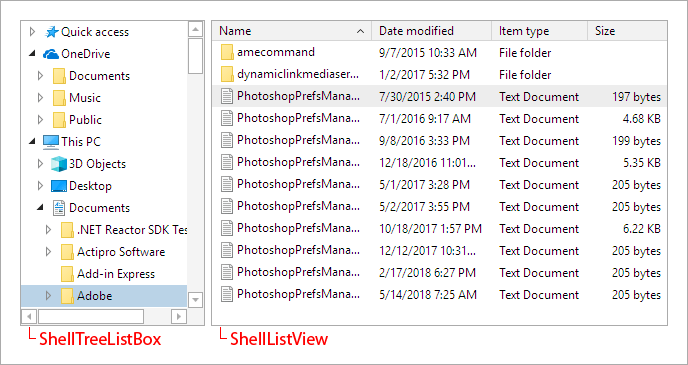 The ShellTreeListBox control presents a shell folder hierarchy in a tree structure. It is often paired with a ShellListView control, which shows the contents of a selected folder using column-based property display. Both controls support customizable tool tips, context menus, multiple image sizes that account for high-DPI scenarios, and in-line renaming.

All of the UI found in the Shell controls is native WPF, even the context menus. Unlike competitive products with interop-based user interfaces, the Actipro Shell controls don't have any airspace or focus issues, and every bit of UI can be fully-themed or even customized with XAML data templates.

Although these controls are still in beta, they should be stable for usage in production.  If you would like to submit suggestions for improvement, please post them in our Shell discussion forum or join our Slack workspace.  We've done a lot of planning with beta testers in the Slack #uicontrols channel.

The line charts have had optimizations in them to try and align to pixel values to reduce anti-aliasing.  While this generally improved readability, when rendering a curve like a sine wave, this can result in some jaggedness of the curve.  We added an option that allows these display optimizations to be turned off for those scenarios.

The dragging experience for a single tab has been improved.  When dragging a docking window over a nested linked dock site, the Shift key can be used to target the outer dock host.

Numerous improvements were made to how InteropFocusTracking handles mouse clicks and focus tracking for interop controls in docking windows.

Dock guides (when in non-hosted node) can now render outside of the bounds of the target dock host when necessary.  This scenario can occur if the containers in the dock host are small.

A new MatchedText property has been added to MaskedTextBox to allow data binding without any prompt text.

The ColorPicker's alpha component has been changed to be percentage-based, which is more in line with most applications.

The ability to customize how Enter keys are handled for various property editor types has been added.

Read-only regions have been enhanced with properties that determine if editing is allowed on their first and/or last edges.

The code outlining logic has been Improved to better handle mismatched outlining nodes.

The JSON parser in the Web Languages Add-on has been enhanced with better error handling.

We've updated the Theme Browser utility in the Sample Browser with a new textbox that allows filtering of resources. 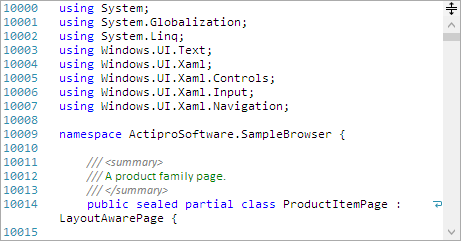 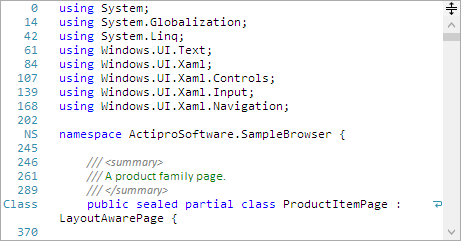