Very large maintenance releases of our v2016.1 WPF, Universal Windows, and Silverlight controls have been released and are now available for download.

We've been blogging about our new TreeListBox and TreeListView controls for a little while now.  They have been in private alpha testing and now we have placed the alpha test in a new public Grids assembly that has shipped in this WPF and UWP maintenance release. 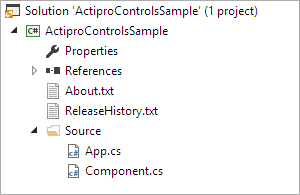 TreeListBox is a TreeView-like control but has many advanced features like those found in the Visual Studio Solution Explorer.  See this blog post for some details on the feature list.

TreeListView inherits TreeListBox and includes all of the tree hierarchy features found in it.  It also displays each row similar to a ListView, columns and all!  This blog post summarizes the features found in this control.

With this public alpha release of the controls, you are able to start using them and can provide us with feedback.  We'd love to hear from you, whether it be via our ticket system or Slack.  Our plan is to finalize them for the 2017.1 version, but they should be pretty stable for usage now.  Anyone with a WPF/UWP Studio or PropertyGrid license should be able to use them immediately under your existing 2016.1 license.

Going forward, we have already made major progress on rewriting our PropertyGrid control and basing it on TreeListView.  So far, performance tests are showing that it's loading large property trees almost instantly.  We'll blog more on this in the upcoming weeks.

There were a lot of tweaks and bug fixes in this build for the Docking/MDI product.  We recommend you grab the latest if you use Docking/MDI.

There were numerous improvements too, including some more major ones like:

Line modification mark tracking logic has been completely rewritten.  It now works much better and even introduces new orange marks that track "reverted" changes, similar to how the Visual Studio editor does.

We added the ability for a programmatically created text change to merge into previous text change on the undo stack.  This allows you to chain additional text changes onto previous ones and have them be undoable as a single unit.

We added a new property that can be set to false to only allow backspacing over a single character when the document's AutoConvertTabsToSpaces is true.

The PasteDragDrop event is now also raised drag over events so that the drag effects can be manually altered.

The ITextChange.CustomData property is now settable so it can be updated after the text change was created as needed. 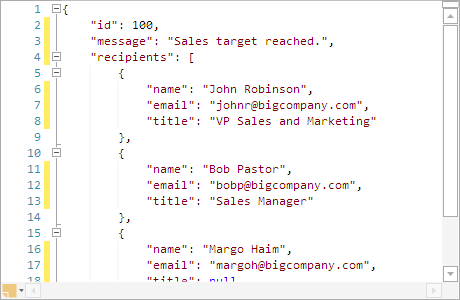 A text formatter for the JSON language has been implemented that beautifies the JSON data. 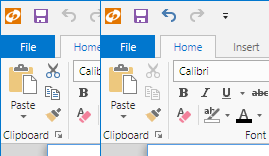 We added the DynamicImage control, which is a drop-in replacement for Image that will auto-grayscale the image content when the control is disabled. Going along with this, we updated ImageConverter to return a DynamicImage instance instead of Image.  Our toolbar, menu, and Ribbon control themes have been updated to use DynamicImage so that you get grayscale effects on images out-of-the-box.  Note how the cut, copy, and undo buttons are all grayscale when disabled in the screenshot above.

If you encounter a 'Could not find a part of the path' to bitmap image source error after upgrading to this version, specify the absolute path to the image source using pack syntax as described in the DynamicImage documentation instead of using a relative path.

The animation above shows several of the features found in this new control such as node expansion, column resizing, column reordering, column header context menus, and more.

Thus far these TreeListView features have been completed:

If you would like to start working with either of the controls and provide us with feedback, please write our support address or chat with us on Slack to sign up for testing.  Now is the time to contribute your additional feature ideas and report bugs.  Anyone who has a WPF Studio license is fully licensed to use the control in their apps.

In this quarter, we published new maintenance releases of all our control products and released the 2016.1 WinForms Controls.  In terms of development, we've been working on a new Grids product (for WPF and UWP) that will initially consist of a TreeListBox, similar to the tree control found in the Visual Studio Solution Explorer.  That control is already in alpha testing to some customers.  While that testing is ongoing, we have made great progress on a TreeListView control, which is a multi-column variant of the TreeListBox control.  This control features everything you find in a standard ListView, along with all the features of TreeListBox, and additional ones like column reordering, frozen columns, etc.  We'll post more on this new control very soon.

Development of the TreeListView control is currently the primary focus.  We hope to wrap that up for alpha testing in the next two or three weeks.  After that we have some other plans for derived controls that are based on the foundation provided by TreeListBox and TreeListView that we will be getting into.

A new version of our Windows Forms controls has been released.  This version includes several large new features along with numerous minor bug fixes and updates.  First, these are some of the major new features… 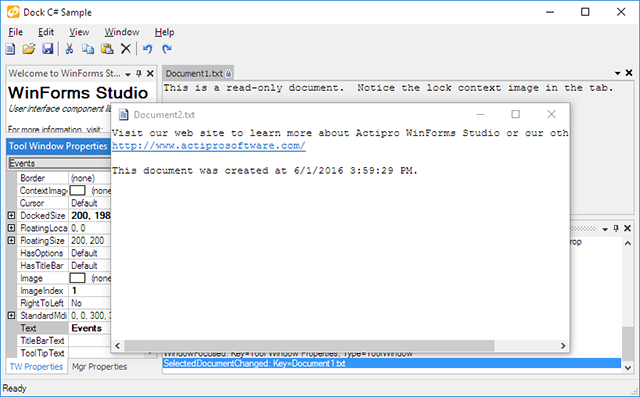 When a new DockManager property is set to true, documents can be floated to their own window.  This allows them to be moved to and maximized on a second monitor.

We've always had layout serialization for tool windows but now tabbed document windows can have their layouts serialized as well.

The C# parser in the WinForms .NET Languages Add-on has been updated to support the parsing of C# 5.0 syntax.

In the last blog post on our TreeListBox control development, we talked about new features like async loading and inline editing that were added.  In today's post, we'll talk about some more new features and we're also announcing that the alpha test of this control is now ready.

If you would like to start working with the control and provide us with feedback, please write our support address or chat with us on Slack to sign up for testing.  Now is the time to contribute your additional feature ideas and report bugs.  Anyone who has a WPF Studio license is fully licensed to use the control in their apps.

Since our new post, we've continued to enhance the control and add new features.  First, you now can optionally display the root item in the control.  When you choose not to do so (the default), the root node's children will be the top-level items.

There is now more control over expandability and when children are queried.

A couple new options determine how far items are indented based on their depth.

Thus far these features have been completed ( marks new features since the last post):

The TreeListBox control is now ready for alpha testing.  Please contact us via our ticket system or in Slack to sign up for testing and send in your feedback.  We will continue to refine the API based on your feedback before a future final release.