We're working on new features for our 2013.1 control releases and today I'd like to show off a new feature coming to the WPF and Silverlight .NET Languages Add-on in that version.

As seen in the screenshot below, hovering over var keywords will now show the resolved type. 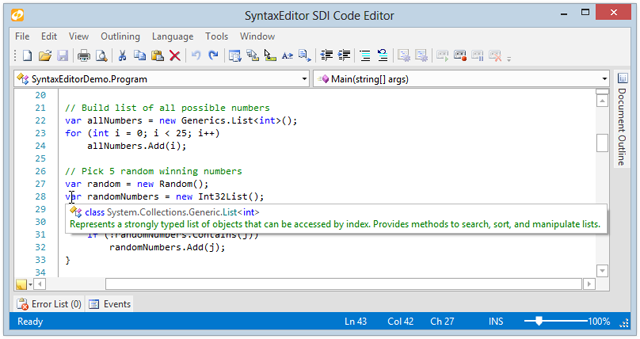 In this case, the resolved type for the randomNumbers variable is List<int>, which we aliased to Int32List above in the usings.

Similar features have been added for the Dim keyword in VB. 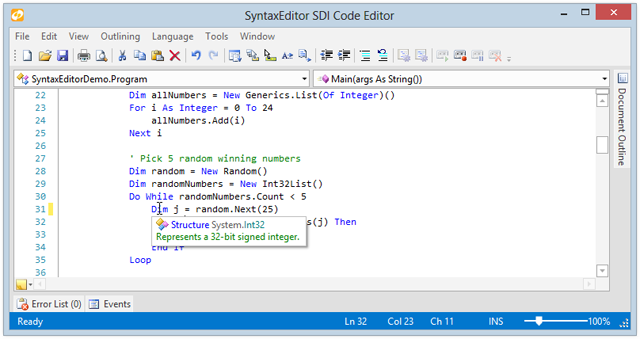 In this screenshot, the j variable is being assigned an Int32.

Our Code Writer App Is Live In The Windows Store

In a previous post we took a look at our SyntaxEditor syntax-highlighting code editor control being run in a WinRT/XAML app on a Surface RT.  This port of SyntaxEditor from our WPF/Silverlight versions is still work in progress and isn't available for sale yet, but rest assured it's coming.  That being said, let's dig into the new Code Writer app that was just released on the Windows Store, which shows the future SyntaxEditor for WinRT/XAML control in action.

What is Code Writer?

Code Writer is a free text and code editing application designed specifically for Windows 8 devices.  It runs on any device, including desktops and ARM devices like Surface RT.

We've built it from the ground up to be fast, fluid, and powerful. Active syntax highlighting updates as you edit files, with 20 file types supported. 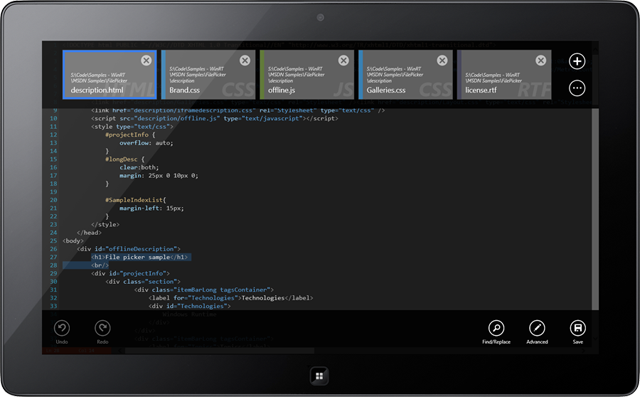 Multiple documents may be opened at a time. Use an intuitive tabbed document interface from a slide-down app bar to switch between documents. Browse to open any accessible document, or reopen recently-opened documents with a tap. 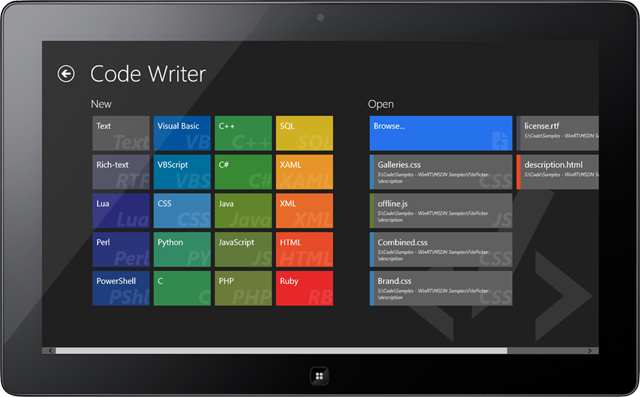 Color is used pervasively throughout the app to create a bond between you and various file types.

This is just a first glimpse.  Jump over to the Windows Store and try it for yourself.  If you have any suggestions or problems, please post them in the dedicated forum for the app.

We'll dig into more features soon.  And if you would like to add similar code editing features to your own apps, please check out our SyntaxEditor control, currently available for WPF, Silverlight, and WinForms.  As mentioned above, it will be available for WinRT/XAML in the future too.